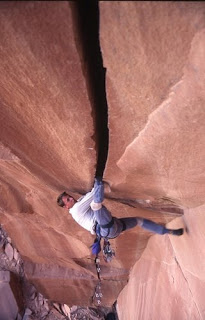 This fall and winter i was able to make a few trips down to the desert.  I got to repeat some cool lines and establish a handful of new ones.


I headed to the desert and beat my partner (pamela), there by a week, so i decided to check out the phantom sprint solo.  I aided on a clove hitch and a single alpine aider plus a double length, and then mini traxioned the pitches as i cleaned.  While the route is a relativley popular aid line, it still hasnt been repeated free since Stevie Haston (a hero of mine) first freed it almost 15 years ago.  I spread out the climbing over three days, fixing lots of ropes and doing lots of mini traxioning and dialing in the route.  Everything was going pretty well for freeing until the crux pitch where i figured i needed more work.  After that, i ditched trying the last two pitches on the mini and went for the top.  Its an amazing route, and one that I want to invest more time in as a free project, as its pretty clean for the fishers and the climbing is pretty awesome.  Hats off to Stevie for that one and his many more!

Only a couple pitches up and PYSCHED!

The Sprint takes the left skyline system.  You can see my haulbag a few pitches up...
After the Sprint I had a few days and hiked about and scoped other mud routes and then went to Onion Creek to check out another Stevie free route.  I forgot my climbing shoes in the jeep, but had fun aiding the thing and imagining the free climbing sequence.  What a cool little tower.

The Hindu
That evening I met up with Pamela in Moab and we were on a mission to climb some offwidths!
We headed to the creek and started out with some obscure classics established by the cobbler himself.  We got on David, Big Red and a few others for a few days, checked out a few potential offwidth roofs and picked out a blue collar project or two each.

A very steep offwidth I scoped a few years back, that sprouted an anchor but no signs of a free ascent. (lots of dirt, loose rock, ect)  Any one know?

Little Pam and "Big Red"
We went back to a shared project of ours, where Pam had freed her pitch a few years ago now, yet I still flop around on the tips first pitch.  I think we put in three mornings on this trip.  I got close, but still no cigar.  Grateful for a patient and dedicated belayer as this thing is kinda frustrating...
Durring the trip I also got to establish a cool little .12a on the Cliffs of Insanity with Trevor and made an onsight of Sacred Space, an adventure of an offwidth.
"Walk on the Weird Side"

Trevor also put a nice offwidth on the far left of the COI, and dubbed it "Insane in the Membrain"

Trevor drilling the anchor after the onsight FA

Pamela and I worked a beautiful two pitch line, consisting of tight hands to fists on the first pitch and then squeeze and offwidth and even an inversion high on the second pitch.  A great line indeed!

On my last morning there, I established a mini tower with the help of Trevor, who was camping with us and he then freed it momenets later.

One spike and two bolts on the aid, and .11a for the free lead.
photo: Emily Reinsel
After a week or two back at work, i got a few extra days off for thanksgiving and headed back to the creek.
Pam and I headed straight up to an old abandoned Alf project that he had come in from above on almost five years back, tr'd and cleaned.  We were able to put it up ground up, onsight and were psyched!  3 pitches of offwidth and squeeze and perhaps one of the finer offwidths either of us have ever climbed.  A good FFA on thanksgiving day; thankful we were!

Hand drawn topos are fun! Bring a bolt kit for the final anchor if you're thinking about repeating this...

One more of the crux pitch.
We then celebrated Thanksgiving at the brewery, took a rest day and then headed to a sick project of Pamela's.  I didn't get any pics, but it is a big, bad offwidth, and the meat of it is up on the third pitch (again!)
A great trip indeed.
I went back to work for a month, did christmas with the folks in Arizona, and then went back to Moab with Trevor for almost a week of climbing and exploring. Amazing that no one climbs there in the winter.
The first few days were a bit cold, but still plenty nice in the sun and we checked out a ton of less than popular zones, including the north wash a few hours to the west.
Trevor and I both got to establish a 5.12 in the creek, put up a cool easy 11 offwidth and cleaned up another line just right of the OW.

scoping choss towers in the sun

A new OW, that is very clean and friendly!

What a fine looking junkshow of an anchor with a couple degenerates hanging from it.
With so much picked out to do in the desert, I can't wait to go back.
Cheers,
Patrick
﻿
Posted by Patrick at 6:07 PM No comments:

Went up to Squat for the first time in almost 6 years and finally sent.  It was the first OW roof that I ever tried to lead and it was nice to come back to it and feel solid.

Here's a short video of it: