Climbed in Vedauwoo last weekend.  Worked and scoped a couple "secret" projects, and got an onsight of "Iron Maiden", an Andy Johnson masterpiece.  Its a very good route and a great example of the potential still available at the Voo. 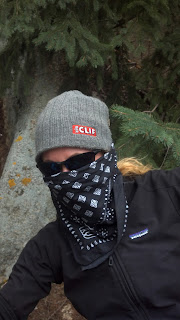 One project is an amazing offwidth roof at a terrible angle that I found last season hidden deep in the woods and brought Pamela to on Saturday.  The pysche was high and she managed to TR it cleanly on her second go, crazy!  I couldn't touch this thing last season on mini trax, but made much better progress this round with good beta and encouragement from below, though still have quite a ways to go.  Its a crazy hard inversion and shuffle at a 60 degree angle and should be the hardest wide thing in the voo.  The lead will be quite sketchy though, as the angle will almost certainly secure a head banger if you blow the crux.  Head bangin' heavy metal!!!!!

The next project is a huge finger crack roof that i also scoped last season and is beyond my capacity. (5.14?)  I think if Pee-Wee comes back through he's gotta check it, but for now, Im gonna keep it DL and flop around it a few more times before writting it off.  Its amazing though, and probably one of the most spectacular lines in all the Voo.

The project that I am most psyched on (read doable .12ish).  Is a flared seam to offwidth and squeeze, that is kinda steep and very asthetic.  Its on a somewhat obscure crag and is a very obvious line.  There is another cool undone steep hand crack right next to it.  Its crazy how much potential is available at Vedauwoo.  And there's more....

So besides a fair amount of hiking and scoping new stuff, I also got to check out Andy Johnson's masterpiece, Iron Maiden, (5.11) that has only had one previous repeat (Pamela) since the first ascent that I or Pamela know of.  It's touted as more difficult than Lucile, with a very similar crux lip and flared finish.  Its an amazing route, that is flared, sharp and steep; its certainly a classic and deserves more action.

http://mountainproject.com/v/iron-maiden-aka-blood-drive/106164072  link to the beta on the proj, and the video of the onsight below.

All in all a very great weekend, with many things on the list both thin and wide.